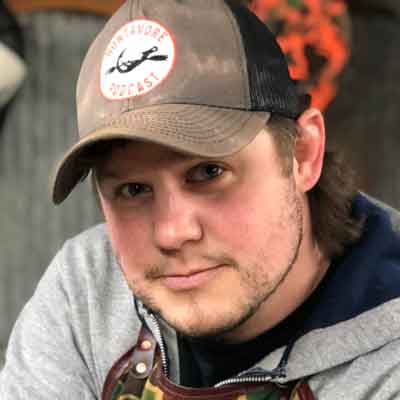 In my book, roasting a large piece of meat for a gathering is about as exciting as it gets. Presenting the large centerpiece, hearing the “Oohh's” and “Aahh's” and filling the room with the amazing, savory smell of seasoned wild beasts. A meal like this does take a bit of prep a few days before. Bigger the cut, the longer it takes.

In this example, I'm using a whole venison hind leg, minus the shank and femur. It weighs somewhere in the ballpark of 6-7 pounds. Any member of the deer family could be used, even wild pork. A single cut could also be used to make a smaller roast, the method stays the same, times and amounts will have to be scaled back.

Bone out particular cuts of meat. As mentioned, I removed the femur and shank leaving the wide open, still connected cuts of the hind leg. If you plan on rolling the cuts, season the inside heavily. With the dry brine process, the seasoning will diffuse within the meat. While it may seem like a large amount, after a few days in the fridge, and then roasted, you will be glad you did.

Here is the Holiday Spice Rub I made:

For an added bit of fancy, add a pork backfat cap. The rendering fat will baste the roast, and add some added crunch. I sliced my slab of back fat a ¼” thick and crosshatched the slices.

Apply ½ to ⅓ of the rub to the inside, roll, add the fat cap, tie the roast tight, holding the fat cap in place and making the roast more uniform to cook evenly. Add the rest of the spice rub to the outside making sure to get it completely coated. Place the roast on a rack or cooking sheet and place uncovered in the fridge (3-5 days for a large cut, 1-2 days for a single muscle).

Bring out the roast to the counter to bring up to room temp an hour before roasting (2 hours for a large roast). Method of roasting can vary; oven, smoker, grill, etc. but the method works the same. For this example, I used my charcoal grill.

Last step is to crank the heat. I switched up for my oven that can go upto 500* Put the rested roast in for 5-10 minutes, or until a sizzling crust has formed on the roast. Since it's already been rested, no need to wait. Slice. Serve. Be a Hero!